“They are both destructive, Futurism only on the exterior. In Dadaism this is deeper; they want to dismantle our inner, spiritual and moral constructions.”

Dadaism and Futurism both focus on an ideology rather than being considered an art movement. Futurism aimed to express the achievements of science and technology and reflect the “dynamism” of modern life, Dadaism on the other hand rejected every moral, social and aesthetic code. The images I have chosen to represent each movement is both aesthetically and conceptually important in revealing how we understand not only the world, artist, artwork and audience of the time it was made, but they also represent how the movement embraced modernism and effectively relied on modernism to construct a cult movement. Boccioni’s “Unique Forms of Continuity Space” is an ideal representation of futurism breaking away from ancient art and revealing its new found beliefs in modernism.

Marcel Duchamp’s “Fountain” is the most important piece in the Dadaism movement, through this work Duchamp initiated the defiance of the boundaries of art and made it possible for ideas to be as important as the act of physical creation. Technical skill was no longer necessary to be considered an artist or necessary to be able to express ideas in artistic form. Each image is developed differently though each movement, therefore our understanding of these works will be completely diverse, although it is evident that one key ideology is prominent in both, the idea of modernism.

Futurism was an Italian movement between 1909 and lasted up until 1915 rather than a typical art movement which had preceded it futurism was an ideology, a way of approaching life rather than an “art movement”. Futurism was started by Fillipo Tommaso Marinetti. The movement began in literature then spread to the art world. Futurism played a double role firstly it was to introduce a new aesthetic which would express the mental and physical sensations of life in the machine age, demonstrating that the Italians were also capable of producing and starting new ideas, not just the French. Secondly it was to shock, ridicule and provoke the Italian public out of their complacent lethargy and to inspire them to create and up to date Italy. This would be achieved through inspiration by the achievements of science and technology and reflect the “dynamism” of modern life. Futurism wanted to erase all notions of traditional art and literature, he wanted to tear down museums and libraries and start over by celebrating the speed and dynamism of new inventions. He glorified chaos and the destruction of modern art, claiming that ‘beauty now exists only in struggle’. Marinetti loathed the past and valued everything modern; to him the most significant symbol of modernism was speed.

Dadaism was a movement much like futurism, more an ideology rather than an “art movement”. It lasted some seven years between 1915 and 1922. This anit-art movement called Dada flourished in spite of its primary declaration that art was dead – that “art is stupid” that “what everyone sees is false” and that art must be destroyed and abandoned. Nonsense alone made sense. Dada was the cult of the irreverent, the absurd and the absolute meaningless. Dada rejected every moral, social and aesthetic code. The aesthetic of dada was that there is no aesthetic since an aesthetic is built on reason and the world had demonstrated that it was built without reason. Although Dadaism suggests these theories, one could suggest that this absolute irreverence does not coincide with the art works which it is represented by. The Dadaist soon discovered that their movement was self-defeating by its very intention; it is simply impossible to be nothing at all.

In 1912, Boccioni visited Paris, where he saw and was influenced by the avant-garde sculptures of Picasso and Brancusi. He wanted to revitalize the ‘mummified art’ of the past, and make more of materials not traditionally used by sculptors, from glass and mirrors to electric lights and motors. His goal for the work was to depict a “synthetic continuity” of motion instead of an “analytical discontinuity” that he saw artists like František Kupka and Marcel Duchamp portraying. This figure is arguably one of Boccioni’s most important and symbolic pieces, as it sweeps forward it carries ‘blocks of atmosphere’ along with it.

“It seems clear to me that this succession is not to be found in repetition of legs, arms and faces, as many people have stupidly believed, but is achieved through the intuitive search for the unique form which gives continuity in space.”
– Umberto Boccioni

The quote above represents Boccioni’s thought process, and the conceptual development of his ideas behind the aesthetic of the art work. The body of work was developed through the ideological process of futurism; therefore we can see how the ideas of futurism have influenced Boccioni and his work. As far as the composition is concerned, “Unique Forms of Continuity in Space” depicts the contrast between the old and the new, the beginning of a new wave of ideas this human like figure seems to flow together almost as if it is a piece of material that has been draped perfectly, this effect gives the sculpture an aerodynamic and fluid form, adding the sentiment of science and advancing technologies while at the same time the surfaces of the carved metal appear to be carved by the forces of wind and speed as it forges ahead. While its wind swept silhouette is reminiscent of a famous 2000-year-old ancient statue “Nike of Samothrace”, both also lacking a face. The polished metal alludes to the sleek modern apparatus venerated by Boccioni and other Futurist artists. The traditional pedestal is no longer apparent and the silhouette bound to the ground by two blocks at his feet.

It is evident that this work reflects on the “Futurist Manifesto” by Fillipo Tommaso Marinetti and the thoughts behind it. Boccioni seems to be carefully dissecting old art and alters it in just the slightest way in order to convey his point. This extreme contrast between the old and new is what makes this work futuristic, Boccioni is showing the audience the past and then tries to persuade them to want and desire for the new, the way he deliberately forces this “unique form which gives continuity in space” upon the audience represents how Futurism as a movement has developed this work to help us understand the importance of modernism.

The awful violence the war created left an immense sense of cynicism amongst the governments and society responsible for pursuing it. Dada was an expression of repulsion at the so-called civilization that had produced such barbarity. Its tools were chaos and absurdity, and it deliberately undermined all the arts; music, poetry, literature, painting and theater. Dada’s focus on chaos and absurdity had a huge impact on 20th century art, spawning a number of important movements, including the dreamlike Surrealism of the ’20s and ’30s.The image I have chosen to explain how Dadaism developed differently and how Dadaism has contributed to our understanding of what this works represents is the photograph of Marcel Duchamp’s “Fountain”. 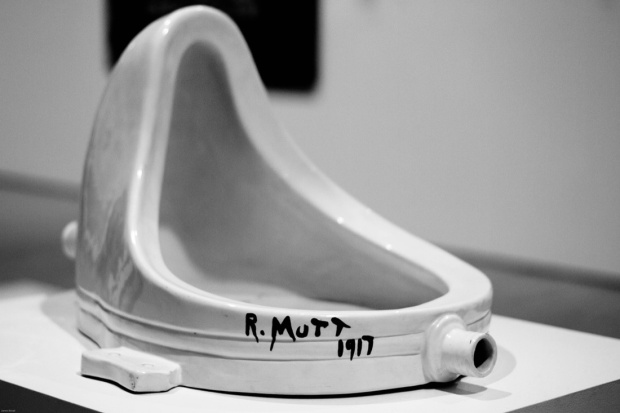 Duchamp deliberately used the ready made urinal, not only did this break the conventions of art, but it started an entirely new way of looking and creating art. By creating this work Duchamp initiated the defiance of the boundaries of art and made it possible for ideas to be as important as the act of physical creation. Technical skill was no longer necessary to be considered an artist or necessary to be able to express ideas in artistic form. Choosing an object for display could be equally as significant as have the most artistic skill, what mattered were the conceptual ideas behind it.

‘Whether Mr Mutt has made the fountain with his own hands or not is without importance,’ said Duchamp. ‘He chose it … he created a new thought for this object.’

“Fountain” is perhaps the best known piece of readymades because of the symbolic meaning of the toilet which takes the conceptual challenge posed by the readymades to their most primitive form. Tomkins notes that “it does not take much stretching of the imagination to see in the upside-down urinals gently flowing curves the veiled head of a classic Renaissance Madonna or a seated Buddha or, perhaps more to the point, one of Brâncuşi’s polished erotic forms.”To me this quote represents the idea that the artwork and artist are not as important as what the audience sees in the work “what everyone sees is false”, this quote is even more important as it argues that no audience will understand what the artist is trying to represent because the aesthetic of dada is that there is no aesthetic and since an aesthetic is built on reason, which Dadaism argues that the world is built without reason bring us back to the conclusion that everything is nothing and will always come back to nothing as far as the Dadaists are concerned. Evidently this image has developed differently and has portrayed the ideology of Dadaism by ultimately coming back to the conclusion that everything is nothing, this theory has allowed us to understand the works’ representation of the movement as it allows us to understand this idea of nothingness which Dada express’.

“They are both destructive, Futurism only on the exterior. In Dadaism this is deeper; they want to dismantle our inner, spiritual and moral constructions.” It is evident that this quote accurately explains the destructive nature that both Dadaism and Futurism have on past art movements. Both movements have tried to separate themselves from the past; they both integrate ideas which can be seen as modern and use modernism as a form of progression in order to break from the past not only in breaking art conventions but breaking moral and social conventions as well. Both images reflect the movement that they came from and thus have developed the ideas from that movement and allow the audience to examine the ideas that the movement tries to sell. The one main commonality between these two movements is the endeavour to break from the past and use modernity as a tool to establish themselves as a way of life. The images I have chosen to represent each movement is both aesthetically and conceptually important in revealing how we understand not only the world, artist, artwork and audience of the time it was made, but they also represent how the movement embraced modernism and effectively relied on modernism to construct a cult movement.

View all posts by Delilah Haze